Judge Susan Oram said she will weigh the evidence presented at the one-day hearing Tuesday and expects to issue a written decision as quickly as possible.

Former Portland Mayor Ethan Strimling said Tuesday that his landlord targeted him for eviction for his involvement in a newly formed tenants union, while the landlord, Geoffrey Rice, said he felt Strimling was trying to “nickel and dime” him, but that he was too intimidated to push back.

Strimling, mayor from 2015 to 2019, said during a summary proceeding in Cumberland County District Court that he once had a good relationship with his landlord at the Trelawny Building at 655 Congress St. But he said he also remains passionate about tenants’ rights, and that after he got involved in organizing the tenants union, his landlord retaliated.

“It felt like it was clear when I walked out of that meeting that I was being targeted,” Strimling said of a May 25, 2021, sit-down with Rice and Rice’s attorney, Paul S. Bulger.

The court hearing Tuesday was the latest development in the case, which dates back to a written notice of termination and notice to quit issued against Strimling last year that he has fought in court. Strimling has argued that the building owner is engaging in a retaliatory eviction in violation of the First Amendment and the Maine Constitution. Judge Susan Oram said she is weighing the evidence and will issue a written decision as quickly as possible.

Rice, who owns and manages several rental properties across the city, countered, saying Strimling pushed back on small annual rent increases more than once, and that he felt the former mayor, who moved into the building in 2016, was trying to “nickel and dime” him.

“I felt intimidated,” Rice told the court. “However, I realized he was the mayor and he could cause me aggravation from the city.” 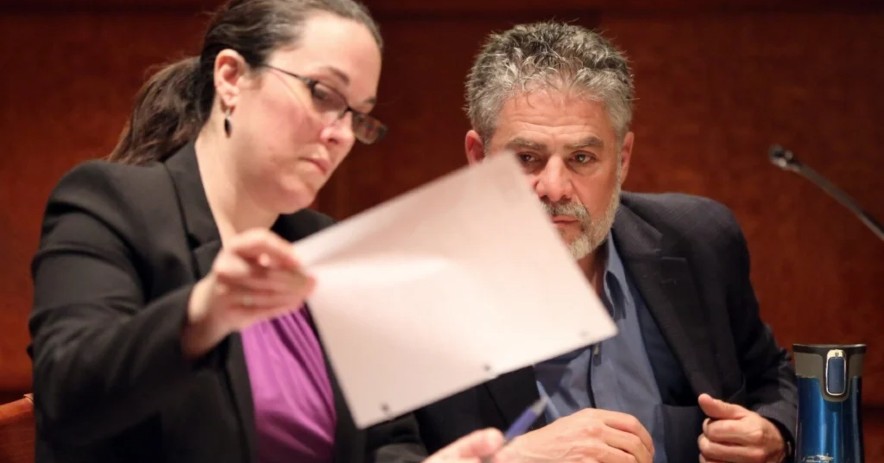 PHOTO: Former mayor Ethan Strimling confers with paralegal Star Wagner while defending an eviction case brought by 657 Trelawny LLC on Tuesday. Strimling contends his role in organizing a tenants’ union was the cause for his eviction notice. Ben McCanna/Staff Photographer